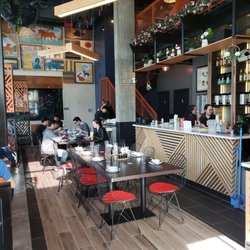 20 years ago, Yao Huang moved to Seattle and began a career in hospital administration. In 2019, with a departure from his hospital days, Yao introduced Capitol Hill residents to his take on Sichuan food at his restaurant, Chuan on Capitol. The menu showcases a variety of chili dry pot dishes and those who like it spicy will delight in Chuan on Capitol’s ability to bring the heat!