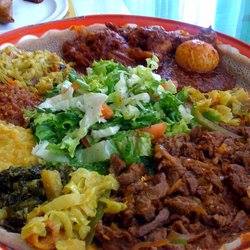 When Shimeles Teferi Kibret moved to the United States, he brought with him the valuable knowledge of traditional cooking he learned from his mother from Ethiopia. With his treasured recipes, Shimeles and a group of other Ethiopian refugees opened Red Sea Ethiopian Restaurant. In 1996, Shimeles bought the restaurant, which had been in the neighborhood for nearly 40 years, and became the sole owner. Red Sea is a no-frill eatery with traditional Ethiopian fare – tibs, kitfo, siga wot and more – that you can eat with your hands.

Fun Fact: Shimeles and his wife Yetanyet keep the recipe for their sauces a secret. But we know they are full of garlic, onions, and ginger.