Prior to Central Cafe & Juice Bar, Bridgette owned a clothing retail business for 7 years. When the economy declined in 2008, Bridgette closed her business and became a manager at Whole Foods. It was during this transition that she realized the next time she had a business, she was going to focus on providing a service that would be able to weather the ups and downs of a turbulent economy.

Central Cafe & Juice Bar is located at 25th and Cherry in a historic, black-owned 1920’s building right around the corner from Garfield High School. Her family is from the which is one of the main reasons why she wanted her business to be located there. She loves how it cuts down her te. She also noticed that there haven’t been many new Black-owned businesses opening up in the area due to gentrification.

The historic building has been a deli, a record store, a barbecue joint, and then vacant for several years before Bridgette moved into the space. Bridgette saw a For Lease sign outside the building in December 2018 and decided to call the number only to be met with a full answering machine. After months of persistence, she decided to reach out one more time. She was finally able to connect with the building owner who had decided to rent to the first person who called and that person was Bridgette.

The process to open the cafe has been extremely challenging for her. “It’s very difficult for entrepreneurs, if you want a brick and mortar and you’re just starting out, to get it,” Bridgette says. “People want to see five years of business credit history before they rent to you.”

To get the business started, Bridgette was able to fund almost all of her start-up costs that way except for the espresso machine, a major part of the business. In a serendipitous series of events, her husband got to talking with a person in a Chicago airport (of all places!) and learned about Business Impact Northwest. The very next day, she reached out and was able to receive mentorship and a small loan to get them across the finish line.

When asked what she’s most excited for in her first year in business, Bridgette said she wants people to see a Black woman-owned business that is successful. She wants to pay it forward by mentoring younger business owners and rising entrepreneurs just like Henrietta Swan Price, owner of Henrietta’s Hats, and the late DeCharlene Williams, owner of DeCharlene’s Beauty Salon, were mentors for her. “Everybody needs to see someone that looks like them, doing something that they want to do. I want to be that person.”

Bridgette describes her business as an “eco-conscious cafe committed to urbanism and the preservation of our historic 1920’s building in the Central District”. When her daughter was in middle school, she did a school research project on the Great Pacific Garbage Patch. Together, Bridgette and her daughter learned about the negative impacts plastic had on the environment and they immediately started implementing sustainable practices at home. It was natural for Bridgette to translate this thinking into her business.

All the furnishings in her cafe were purchased from Habitat for Humanity ReStore and Second Use who work with businesses and contractors that have a need for their inventory of products. Instead of sending them to the landfill, they resell them. They continued their sustainability efforts by purchasing compostable and locally sourced paper products. They use a Portland-based company called Green Products who plant a tree with every purchase.

With vegan, vegetarian, and plant-based diets on the rise, she has educated herself on ways to make healthy food that’s both good for us and good for the planet. Bridgette believes it is really impactful to talk about their sustainability efforts with her customers. “Once you talk about it with people, then they realize and they understand, and then they can figure it out for themselves.” 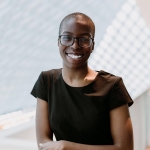 Thanks for all you do to #SpendLikeItMatters – shop small, buy local, and #BeIntentional! Discover awesome brick + mortar small businesses in your community, suggest your favorites, and be sure that you’re following us on social media (Instagram, Facebook, Twitter).

Intentionalist is your local guide to small businesses and the diverse people behind them. We believe that where you spend your money matters, and we’re sure glad you do too. Whether you identify as a localist, activist, or just a good neighbor, we make it easy for you to connect with, learn about, and support small businesses in your community through everyday decisions about where you eat, drink, and shop.